As he waits to head back out on tour with his All Starr Band in September, Ringo Starr has posted a video update at his YouTube channel in which he shares some news about an upcoming release he has planned.

In the clip, the former Beatles drummer starts by sending out his usual “peace and love” message to fans, explaining that he’s hanging out on a beautiful day.

Then, after noting that the tour will be picking up again in September after a bunch of June dates were postponed, he declares, “I have another EP out in September. It’s called EP 3. And so, September’s gonna be pretty busy, thank you.”

As previously announced, Ringo and the All Starr Band’s postponed shows were rescheduled to run right into their fall North American leg, which is mapped out through an October 19-20 stand in Mexico City.

As its title suggests, Starr’s upcoming EP with be the third EP he’s released in the last couple of years. The first, Zoom In, was issued in March 2021, while the second, Change the World, arrived in September of last year.

Meanwhile, the end of the update video features footage of Ringo having fun while briefly jamming out with Toto and All Starr Band guitarist Steve Lukather on a version of Deep Purple’s “Smoke on the Water,” with Ringo accompanying Steve on bongos.

After he stops playing, Starr comments, “Let’s do a version of that,” then declares, “Bongo boy!”

You can check out the All Starr Band’s full list of tour dates at RingoStarr.com. 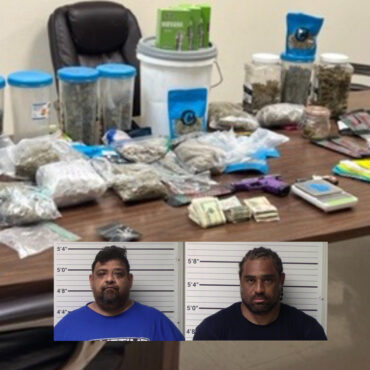 The Kerr County Sheriff's Office Special Investigations Unit (SIU) conducted an investigation regarding the sales of drugs in the area, resulting in two individuals being arrested on various drug-related charges.  Reports led investigators and the Special Response Team (SRT) to a home on Fifer Street, in Kerrville, in which investigators obtained a search warrant for the home. Prior information was relayed to authorities that there might be the presence of […]

Darryl Hunt, bassist for The Pogues, dead at 72